Kacper Hamilton was commissioned by Clarks to design a Limited Edition boot, celebrating the 65th anniversary of the Clarks Desert Boot and to raise funds for The Halo Trust charity.

Hamilton's design "Destiny Guides Our Fortunes..." was inspired by the fictional character of Don Quixote, who set about to undo wrongs and bring justice to the world. The materials evoke a sense of British adventure with the tweed and embroidery representing old traditions of outdoor living and travelling. An embroidered pheasant adorns the left heel whilst a hidden quote from the book Don Quixote is placed on the inside of the right shoe. A brass fob accompanies the shoes, which is engraved with the KH monogram on one side and the Clarks logo on the other side.

As part of the 'Clarks: Rebooted' exhibition, the shoes were be exhibited at Design Shanghai (March 2015) then travelled to the Salone del Mobile in Milan (April 2015), Frieze Art Fair New York (May 2015) and finally to London Fashion Week, London Design Festival and Frieze Art Fair London (September - October 2015). The Limited Edition of 250 is sold out. Clarks donated the profits from the sale of these boots to its Clarks: Rebooted partner, The Halo Trust.

“Destiny guides our fortunes more favourably than we could have expected. Look there, Sancho Panza, my friend, and see those thirty or so wild giants, with whom I intend to do battle and kill each and all of them, so with their stolen booty we can begin to enrich ourselves. This is nobel, righteous warfare, for it is wonderfully useful to God to have such an evil race wiped from the face of the earth.”

“The ones you can see over there,” answered his master, “with the huge arms, some of which are very nearly two leagues long.”

“Now look, your grace,” said Sancho, “what you see over there aren’t giants, but windmills, and what seems to be arms are just their sails, that go around in the wind and turn the millstone.”

“Obviously,” replied Don Quixote, “you don’t know much about adventures.” 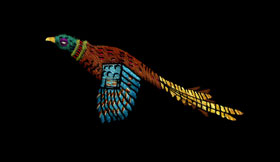